At ECLC, we recognize the contribution of our teachers to the development of our children and reward their commitment with a competitive salary. Maybe more importantly, we offer and request a work atmosphere characterized by mutual respect, the willingness to take responsibility and grow professionally as well as -of course- the joy of teaching.

Passionate teachers who identify with our play-based and child-centered approach to learning and meet the requirements listed below are invited to submit their application documents.

Please submit a cover letter and CV/resume to the Head of ECLC, Ms. Concha Hernandez at [email protected].

ECLC, Early Childhood Learning Center is a not for profit premier English language early childhood program for children aged 2 to 6 years and has been serving the Seoul community since 1969. ECLC is located within walking distance of Itaewon, Seoul’s expat haven and is housed in a bright new and airy facility. Our 120 students are taught utilizing both the International Early Years Curriculum (IEYC) and our American-style teaching philosophy.

We focus on developing the cognitive, emotional, social and physical potential of each child in a secure and stimulating environment. ECLC has 19 compassionate and talented teachers from 6 different countries. They nurture and educate students by differentiating instruction which allows them to be challenged while feeling successful in all aspects of the program. Our parent run community includes families from more than 20 countries who actively engage in ECLC life and activities.

Seoul is the capital of South Korea and the 18th largest city in the world. It has a population of 20 million of which approximately 5% represent foreigners. Seoul is considered a leading and rising global city with the world’s 4th largest metropolitan economy. It is the home of Samsung, LG, Hyundai-Kia, while most multi-national companies have offices in the city as well. Seoul is the world’s most wired city.

Not only does Seoul offer advanced and innovative technologies, it also boasts a variety of cultural and art festivals, international cuisine, children’s activities, and natural scenery and escapes. It is a safe modern city with exceptional public transportation and is a great starting point for travelling to many countries in Asia. Korean is the main language,-however, Seoul is very English friendly. Seoul enjoys four distinct seasons. 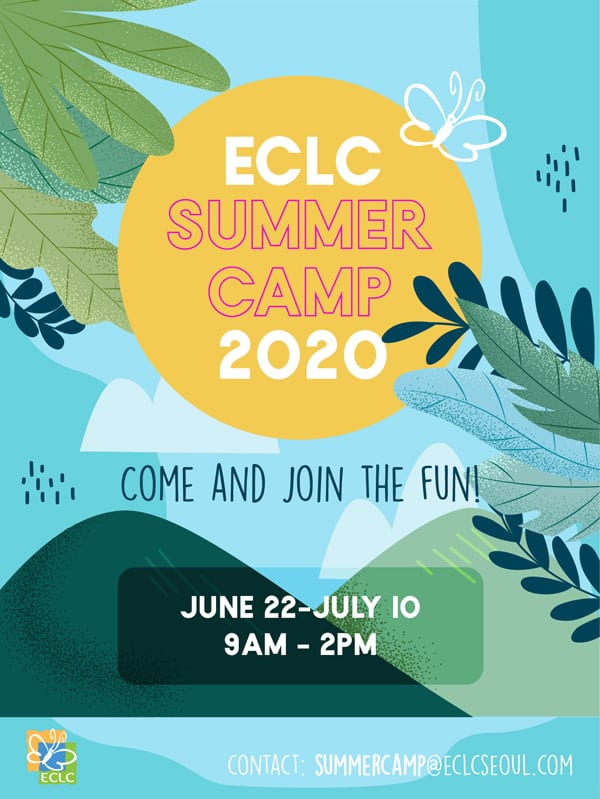